MIPS versus VVP: What Does MedPAC Say? 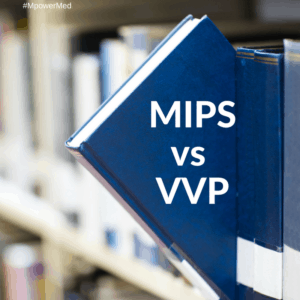 When the MIPS payment program was introduced in 2017, the intent was to move physician reimbursement to a value-based model in which providers are rewarded for the quality of care provided and patient outcomes.

How is VVP different from MIPS?

As the name suggests, the VVP makes it voluntary for physicians to participate in value-based reimbursement. Eligible clinicians could choose to be part of a virtual voluntary group and be assessed for value payments based on the group’s performance across a set of measures. But, rather than using meaningful criteria from EHRs, the measures would rely on claims data to assess performance.

For example, the VVP model would assign scores based on population-based performance measures such as spending per hospitalized beneficiary or patient mortality rates. The data would be derived from claims. This would put the onus of tracking performance on the CMS. In other words, physicians would be relieved of the regulatory burden they face with the MIPS approach.

Why does the MedPAC want to replace MIPS?

The commission is worried that the MIPS model is too cumbersome and does not encourage physicians to improve care. MIPS has also been criticized for placing too much importance on a doctor’s performance rather than whether the provider took the correct decisions to improve the patient’s care. To address these issues, MedPAC has voted in favor of the VVP, which it feels is less burdensome for providers.

What’s the holdup in moving from MIPS to VVP?

2017 was the first performance year under the MIPS model and the performance in 2017 will affect reimbursements in the payment year 2019. Physicians are only just beginning to get used to the MIPS approach. Many have invested time and money in infrastructure to support participation in MIPS. The holdup in moving from MIPS to VVP is that it could lead to further frustration with yet another payment model.

An additional concern is the fact that VVP involves the formation of voluntary groups. This could lead to physicians with a mostly healthy patient demographic banding together. If this were to happen, doctors who see less health patient populations would be less likely to receive incentives as they would not be included in these voluntary groups.

Finally, MIPS has put physicians in the driver’s seat. With VVP, this control would once again be withdrawn and reimbursement would be on claim-based measures. The original intent of MACRA was to put physicians in control in the transition from volume-based care to value-based care.

Is the transition from MIPS to VVP sure to happen?

The 16-member MedPAC, which consists of healthcare executives, policy experts, and physicians presented their findings to the Department of Health and Human Services in March. The next step will be for Congress to vote on the transition from MIPS to VVP later in 2018.

Contact us to find out how we can help you figure out MIPS.